Even as a young girl, I wanted to be a lawyer fighting for the rights of others. I recall watching a talk show with my mother when I was nine years old and talking about the plight of the mentally ill due to deinstitutionalization. It was then I knew I was going to an attorney.

I was the first in my family with an undergrad degree, no less postgraduate education. I earned my law school degree from University of Miami in 1986 and then joined the Florida Bar. Though, before law school, I had a career in law enforcement and an undergraduate degree in criminal justice. Despite my background, which would have been well-suited for a practice in criminal law, I found myself exposed to insurance defense work as a young lawyer and loved it.

I joined an old-line Miami insurance defense firm, which was founded in 1926, and was trained to be a litigator, which I enjoyed, but it was hard being a young woman in a room full of male lawyers. I was repeatedly mistaken for the court stenographer and called “sweetie” and “honey”.

When I first started practicing, the firm’s lawyers would go to attorney-only lunch at a private Club every Friday. The Club was normally exclusively for men but on Fridays, they would allow women to accompany the male members. During those days, I was one of the few women permitted in the Club.

Despite these obstacles I was promoted to partner after just 5 years, and then shareholder, and ultimately managing partner of a multi-office practice. Because the older partners I worked with were progressive for that era, I was allowed to try my first case within my first two years of practice and tried many more cases thereafter.

While I enjoyed my active litigation practice, I struggled to find the right family balance with being a parent to my two children. I distinctly recall an instance where I was in a courtroom on a large commercial damages case with about 15 male attorneys. I was seeking a continuance of trial due to my anticipated due date of my first daughter when the presiding male judge came in the courtroom and literally said, “I hear one of you is pregnant.” I quickly became the unicorn in the room and all eyes were glaring on me. Although I got a continuance of that trial, it was only a two month extension before having to complete discovery and be ready for trial, allowing me only a three-week maternity leave. To this day I regret having missed the first two months of my daughter’s life.

I stayed with that Miami firm for 14 years, until 2000 when we disbanded and I joined a professional liability defense firm in Fort Lauderdale. I stayed there for 9 years until I was asked to launch Litchfield Cavo LLP’s new Fort Lauderdale office in 2009, where I am currently a capital partner.

I am very appreciative of the support and the mentoring I received throughout my legal career and take great care when mentoring others and the next generation of female litigators. 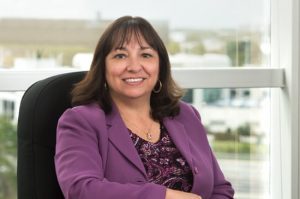